What does a numerical forecast model do (in one sentence)? 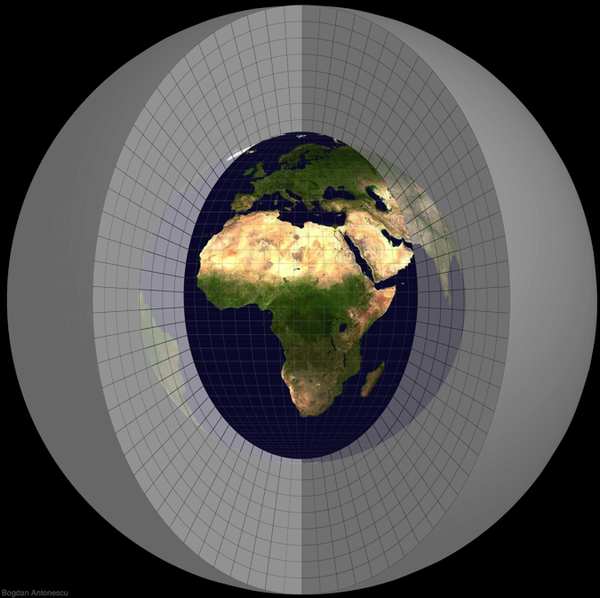 It divides the atmosphere into layers of 3 dimensional cells; simulates the physical processes in each cell at a given time-step based on starting meteorological measurements; calculates the affects on the neighboring cells; and then advances to the next time-step to repeat the process.

Why are there two distinct types of models (global and regional)?

It is an issue of computing power! To be able to run a full physics simulation on global scale and at a cell size of down to 10km, the order of 1 million CPU's are need to run in parallel. This will not be available until the next decade, so in the meantime global models make life easier on themselves by making a "hydro-static" assumption. They assume that the atmosphere is static vertically with the pressure gradient wanting to push air up but with gravity countering and keeping all stable. With this (incorrect) assumption, operationally calculating the dynamics of the atmosphere on a global scale is feasible. The simulation however, does not cope well with local weather phenomena such as convection (vertical movement of air due to thermodynamics).

There is however, currently enough computing power to run full physics simulations over limited regions (up to the size of Europe or the continental US). This is performed by regional models that work on a non-hydro-static basis and are able to closely simulate convective processes. These models are also named "local" models, "non-hydro-static" models or "meso-scale" models. Regional models also operate at finer resolutions down to cell size of about 1km.

Regional models do have drawbacks due to the fact that they have edges or borders without "neighboring" cell and they tend to develop errors due to this.

Until the next decade, when we will begin to see operational forecasts by global non-hydro-static models, most national weather services use both kinds of models. The global ones for synoptic scale weather forecasting and also for initializing runs of regional models. The regional models output is used for forecasts of local (meso-scale) weather phenomena.

A few words about resolution and meteorological scale

The following chart approximates the division between the coverage of the two types of models. 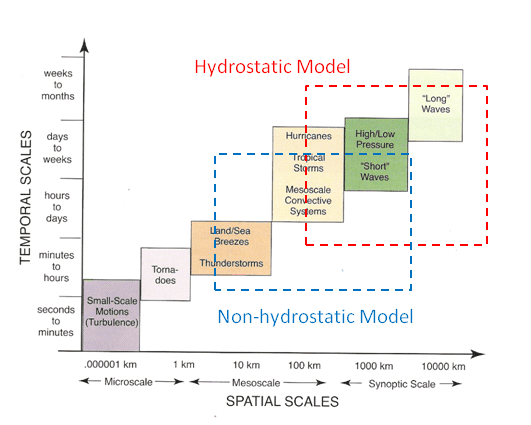 As a general rule, a meteorological phenomena seen 5-7 adjacent cells will be resolved by a model. From this a 14km resolution model should be able to resolve phenomena on a 100km scale. A 1km model should be able to resolve a 7km phenomena. However, it's not only about resolution. It is also about the level of physical simulation (with or without simplifying assumptions) and it's also about the fidelity of the static earth data which includes topography, land coverage, soil types and many more influencing parameters.

What are the global models good at?

Global models are good at forecasting synoptic-scale weather. They are also less error prone than regional models and therefore should be consulted for forecasts beyond 2-3 days and out to 10-14 days. In open ocean where there are no local weather effects, global models are king.

In places where there are local weather phenomena due to mountains, coasts, lakes, urban areas and islands, global models tend to miss part of the local weather behavior and need to be used with caution.

What are the regional models good at?

Regional (local) models are good at forecasting local weather in the short term (up to about 3 days). They provide most benefit in areas where there are factors influencing local weather such as islands, coastlines, topography and land coverage. Mediterranean weather is largely influenced by local factors especially when there are no dominant synoptic patterns in place. It is therefore recommended to consult regional models for short term weather forecasts in the Med.

Global models we all know and love include: the US GFS; the European ECMWF; the Canadian GEM; the French Arpege; and a couple of others.

Local models that may be encountered in the Mediterranean area include: WRF (Turkey, this site and several other providers); COSMO (Greece, Israel);  Aladin (Croatia); Skiron (University of Athens and other providers); Arome (France).

The meteorological contents of this site, both those produced by this site and those of third parties, are exclusively the output of numerical weather prediction models and include no analysis or official forecast. The contents are provided only on an 'as is' basis and also on an 'as available' basis without warranties of any kind as to the fitness, accuracy, completeness or timliness of the content. The user alone bears the risks that may derive from usage of the content. The user acknowleges that weather forecast data should always be compared between several different sources.