On the night of 9-10 August 2017 Formenera and Ibiza were hit by a severe convective storm that was "unexpected" by most skippers in the area who did not secure their boats accordingly. The result was severe damage to many craft. The following link wil bring up a presentation and discussion on this particular storm.

Link to the presentation

What does openWRF provide to forecast thunderstorms and convective systems

Where do I find these thunderstorm indicators?

Go to "Charts" in the main menu then select the model covering your area of interest. Following that, in the forecast variables, first select "Instablility Index CAPE" and then "Simulated weather & storm Radar".

Both variables are also shown in the meteogram for a specific location using "Wind & Waves" in the main menu. To better understand the area probability of thunderstorms it is recommended to first check the "Charts" section before focusing on a point in "Wind & Waves"

What do the numbers tell me?

CAPE is a measure of instability. However, instablility on it's own is not enough to ensure thunderstorms. There needs to be a lifting factor due to orography or frontal activity. Check for other hints such as high humidity and a forecast of showers in the area.

Less than 300 : little or no convective potential

REFLECTIVITY is a measure of the amount of water/hail in the atmosphere and also and indicator of its velocity (vertical) in the case of Doppler weather Radars.

Less than 40 dBZ: mainly and indication of the amount of precipitation to be expected

40 to 50 dBZ: Thunderstorms are probable

The following examples are related to severe squalls in Formentera on 9-10 Aug 17. The first chart displays values of CAPE and it shows extreme instability in the Western Mediterranean near Ibiza at 18Z. CAPE values increase SW of Ibiza and Formentera. 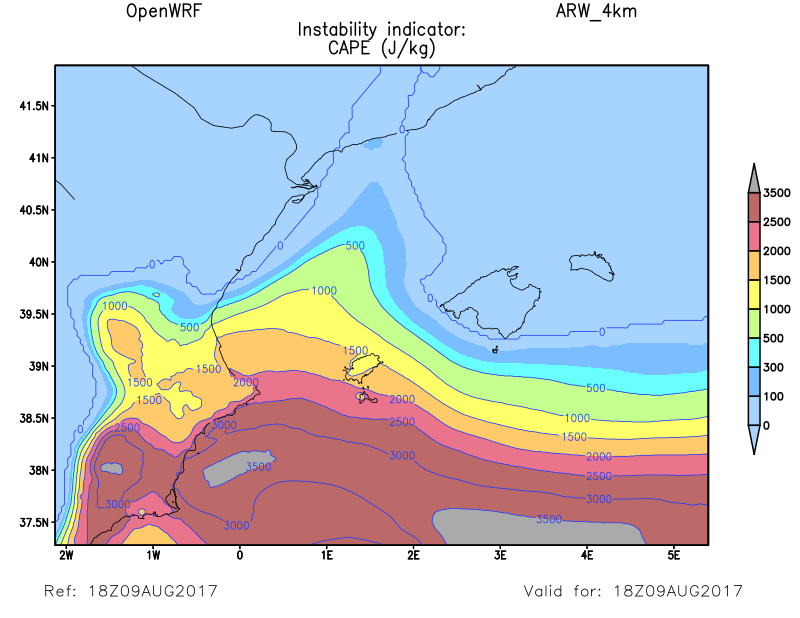 The next sample chart displays the forecast for simulated Radar Reflectivity. It shows a huge supercell storm that developed 5 hours later and, according to the forecast, is about to hit Formentera and Ibiza's west coasts. More lines of forecast thunderstorms (values above 40-45) can be seen NW of the Baleares on the Spanish coast. 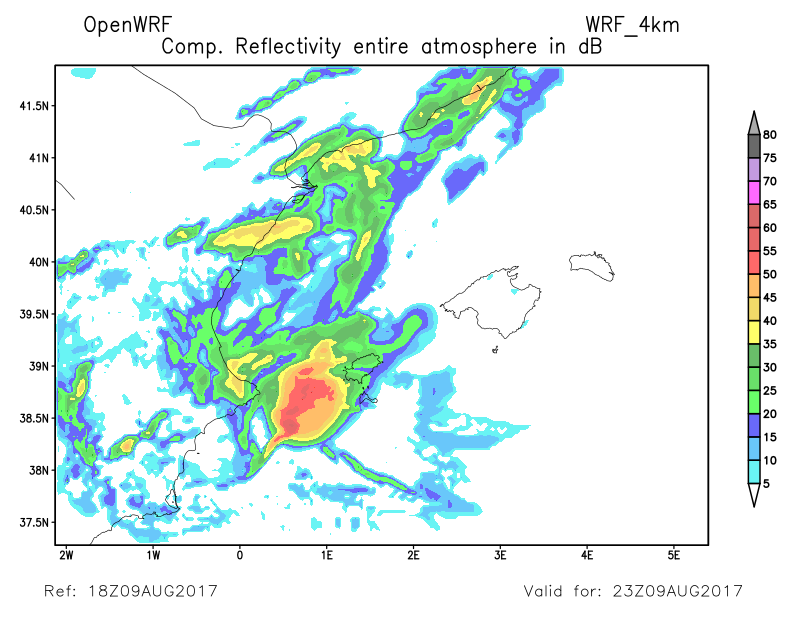 The meteorological contents of this site, both those produced by this site and those of third parties, are exclusively the output of numerical weather prediction models and include no analysis or official forecast. The contents are provided only on an 'as is' basis and also on an 'as available' basis without warranties of any kind as to the fitness, accuracy, completeness or timliness of the content. The user alone bears the risks that may derive from usage of the content. The user acknowleges that weather forecast data should always be compared between several different sources.